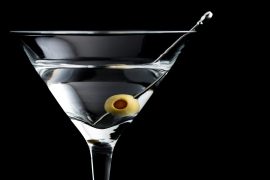 We spent Thanksgiving weekend in Nashville. It seems every chef in town wants to show fancy ways of doing Southern cooking. There’s duck fat, grits, greens, even tater tots IN duck fat everywhere. Nashville Hot Chicken has become a national phenomenon.
I’m not complaining. Well, maybe just a little. I might be just a little relieved when the craze dies down a bit.
We found ourselves driving around and marveling at this new city that has erupted over the years.– There wasn’t a lot of traffic on Friday so we could drive and gawk. We stopped off at Union Station Hotel. Their lobby bar, Carter’s, is a beautiful place to admire the old station dome, people watch and enjoy adult beverages and small plates.
Randy never tires of BBQ so that’s what he ordered. 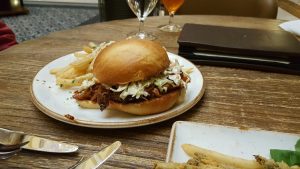 It was served with their “Championship” BBQ sauce. It was a very nice sauce. At my behest he swapped out the sweet potato fries for truffle fries sprinkled with parmesan. Let it be known that I never tire of truffle oil, its earthy aroma and flavor a heavenly addition to just about anything.
I ordered fried asparagus and collard green artichoke dip. I’ve been known to say that you an deep fry anything and it will be a hit. I think that’s been proven out at state fairs. But some fried things have truly surprised me. Scallops, green beans….and this asparagus. 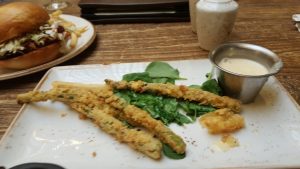 More a tempura batter than a heavy coating, the tender green shoots of asparagus popped with flavor. The collard green dip was not just a rehash of the chain restaurant spinach app. It was lighter, kind of a tossed version with ribbons of greens in a sour cream cheddar base. The toasted round pita chips scooped it all nicely with a twirl of a collard green ribbon dangling from the scoop. 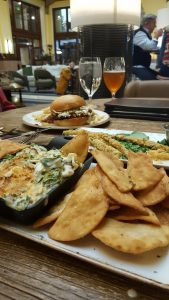 There drink menu was full of Tennessee beers and booze. I marvel at all the micro distilleries and breweries that have cropped up in recent years. There was a time, folks, when Jack Daniels was a novelty in Tennessee AND you couldn’t sample it at the distillery because it was a dry county. Things have really changed!
I had a Pickers vodka martini. And then I had to compare it to one of my favorite vodkas, Tito’s from Austin, so I had a Tito’s martini. Both are corn vodkas. I still favor Tito’s but I wouldn’t turn away from a Pickers. I thought about doing a round of potato vodkas to further the taste testing but reason prevailed. Another time….
For dessert we had the mother of all pound cakes, Tennessee Honey Cake dolled up with as the menu said: “Belle Meade Bourbon poached pears, Jeni’s Vanilla Ice Cream, Sage Caramel and Fennel Crystals. All wonderful flavors, some of them lost in the overzealous creation. I tasted a candied baby sage leaf but I had to fish for it and it didn’t really enhance the dish itself. I asked the server for some fennel crystals to sample on the side and they were a revelation. She brought me a tiny ramekin with a half teaspoon full. They are divine. But alas, again, didn’t really enhance the dish itself. 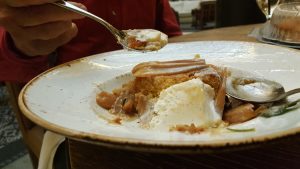 Randy’s Fat Bottom beer at Union Station was so tasty that we went to Fat Bottom’s brewery/restaurant, The Hopyard, for Sunday brunch. It’s in one of those neighborhoods that, as Nashville grows and grows, is being gentrified. The Nations it’s called. It’s off Charlotte Pike. My friend Debbie said, “You know. Near the old prison.”
It’s still being developed, a bit stark, but the brewery had a nice brew house feel to it. Tall ceilings, all warehouse sleek. The waiter looked surprised to see us. Maybe because we were there at 11:30. By the time we were leaving about 1, the place was filling and had a lively vibe both inside and out on the patio.
I ordered biscuits and sausage gravy and soft scrambled eggs. The biscuits were flaky yet substantial enough to hold the gravy laden with ground sausage. The best I’ve had. As an added bonus, the eggs WERE indeed soft scrambled. I’ve found you can’t always count on that even in the most discerning breakfast places. It all went well with a Fat Bottom W.A.C. 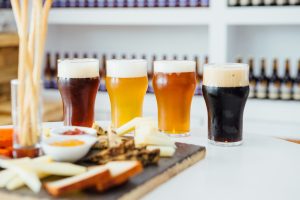