Adventures at the Tijuana Border Crossing 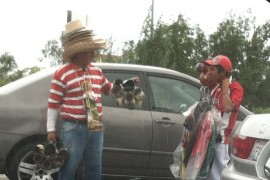 Recently we  got back from another trip to Ensenada.  It was certainly a welcome relief from the cold of New Mexico.  It was a lovely trip. I had brioche and a latte at El Rey Sol one morning.  There’s something about revisiting favorite places in foreign cities. I started at an outdoor table but had to move inside when some worker started jackhammering the street.

El Rey Sol is such a gathering place in Ensenada.  It is a restaurant founded in 1947 by French ex-pats and everyone goes there.  It’s full of business associates, families, friends, lovers.  I think of it as very French.  And indeed three languages are tossed around there.  It’s 10:30 in the morning and there’s a pianist playing everything from Beethoven to Billy Joel and the place is roaring with conversations.

One morning I enjoyed a latte at Starbucks. OK not so exotic but watching the city workers trim the palm trees along the boulevard added an exotic flavor to it….

I discovered a new restaurant, La Fonda.  I’m not even sure where it is exactly.  It’s along what they call the free road.  Parts of the toll road are out so a lot of our trip down was on the free road.  Luckily, it’s very well maintained since the toll road may not be repaired for a year.  Anyway, La Fonda is somewhere outside of Ensenada before you get to Rosarito, I think in a little community called La Mision.  Al Capone apparently had a palatial home in Rosarito Beach.  Maybe La Fonda’s been around that long.  It was right on the ocean and the seafood was incredible. Our new friend Scott took us there for lunch.

We’ve become old hands at this little bit of Mexico so we thought. But travel is always an adventure.  Travel is not for those who want to remain in their comfort zone.  Travel can be enlightening, enriching, enraging, frustrating and challenging. So come with us now as we head back to the border at Tijuana.

You’d think we would be veterans at the border crossing at Tijuana by now.  But alas…

First of all, I have yet to master getting in the correct lane to get to the US.  I have twice had to circle around to try to get back heading north and even the locals can’t tell you how to circle through town and find that long line of cars heading to the US. This time, that was the least of our problems. Somehow, I can’t tell you how, I got to the lane heading to the border.  If you’ve never crossed from Tiajuana, it’s like this:  5 lanes, bumper to bumper, moving up a few feet at a time as everyone inches toward the California border.  The first time we did it, I had no idea what to expect.  That time, we were in line for 4 hours.  We started with a half tank of gas but almost ran out before we got to the border.

The border is a circus.  Vendors walking between cars selling garish crucifixes 3 feet tall, Panama style hats, tortillas, whirligigs, baby dolls who squirm.  Small carts are set up along one narrow lane in between the cars with ice cream, cold drinks and other food items for sale.

Once you’re there, you are there, there’s no turning back, there’s – just the endless lines of cars, the endless circus as you inch your way forward.  Very claustrophobic.

I was feeling pretty confident – I had a full tank of gas; I was  in a great car, my mother in law’s 95 Caddy, less than 100,000 miles, drives like a dream.  I’d found my way back to the north bound lanes without too much hassle and we were less than a half mile from the border.  It’s Saturday midday.  There’s no expectations of long delays.

Then, I kid you not, the car starts to sputter.

“Put it in neutral and rev the engine,” Randy shouts.

That’s what I do:  throw it into gear, sputter up a few feet, throw it in neutral, give it gas to keep it from dying.  The border seem so far away now.  Sure enough, our worst fears – the car dies.  There we are.  A mile of cars behind us, cars in 4 other lanes around us, we can’t move.

A vendor comes to the window.  I roll it down (Hey!  Some power left in the car!)

The very idea is ludicrous.  Can we have a tow truck dropped by helicopter please?

“A tow truck!  We want a tow truck!” Randy shouts from the passenger seat.

“Mama, you want me to push you to the border?  Hundred fifty dollars.”

I know that Randy.

To the vendor, I say, “I’m having trouble reaching anyone on my phone.”  Who to call?  Who could possibly help us?

He shouts to one of his compadres along the line and a phone appears at my window.  My new “friend” dials the number for our only friend in this area of Mexico.

“Scott, it’s Lara.”  I tell him what’s happened and he says, “Gee, I have no idea.  I’ll talk to Cynthia and make some calls.  Maybe someone will know something.  I’ll call you back.”

He’s right.  I’ve got to move.  But where?  I allow him to push us to the narrow lane with all the carts of merchandise in between our traffic lane and the next one.  At least now, we won’t get mobbed by the people behind us waiting in line.  He’s pushed us less than 50 feet.

Back to the window, he says, “Hey, Mama.  Thirty dollars.”

“Hey, I got to pay my friend for using his phone.  He has to pay for minutes, you know.”

“I’m not paying you thirty dollars!”

He leans toward me, into my window and says, not without a little menace, “Mama, I got to pay my friend.”  But I lean right back into his space, “Back away from me and don’t call me mama again.”

I am, at this point, ready for a fight.  I will get out and confront this rude stranger and threaten him with my cane!  The rules of southern etiquette require that all parties be polite and at least appear non-threatening or all bets are off.

But I’m not done.  ‘Where I come from people let people use their phone for free when they’re in trouble.  I’M. NOT. PAYING. YOU.”

“Roll up the window, Lara!”

This time, feeling confident that I have made my point, that I have not allowed myself to be bullied, I press the button for the electric window. But because whatever power was left in the car is ebbing away, the window only inches its way up, at last separating our angry faces.