Was It Good for You? 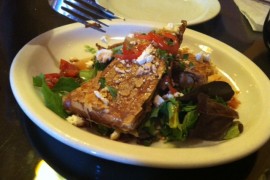 Just because I’m not creating in the kitchen right now doesn’t mean I’m not appreciating the work of others.  I am depending on others to provide my enjoyment of food.  And Jambo Café in Santa Fe satisfies on a deep level.  I am always amazed at their perfect curries and sauces.  Their flawlessly spiced dishes make me think that wars over spice routes were a little bit understandable. And when I think of that harmonious blend of flavors, I think – UMAMI! Kind of like EUREKA! of the taste buds.  Before I began this post, I looked up umami to see if I was using the term correctly.   I was and I wasn’t.  In an article that was full of chemical formulas and scientific explanations for taste buds doing what they do and why, I learned that umami was first proposed as a flavor in 1908 by Kikunae Ikeda and it’s been debated ever since.  The term umami was borrowed from the Japanese and means delicious taste.  No argument there.  But the article also described it as one of the five basic tastes along with sweet, sour, bitter and salty.  Something about the detection of the “carboxylate anion of glutamate in specialized receptor cells present on the human and other animal tongues.”  Hence, MSG as a food additive.  This is where the scientists and I part company.  I think of MSG as cheating and to me there are four tastes and then there is – SUBLIME.  Sublime comes from a combination of the four basic tastes being stimulated in perfect harmony, none overpowering another, all working together to create something greater than the sum of its parts.  It is something not easy to achieve and like art or pornography, it is something indescribable but you know it when you see it – or in this case, taste it.  Really it’s more of an experience than even a taste. I have used the term orgasmic in referring to foods and some people are really uncomfortable with that but what is orgasmic if not a really incredible all-encompassing pleasurable experience?  Umami is that in food. Jambo’s sauces and curries reach this state of heavenly flavors consistently in their dishes.  And I am very grateful to them for it. 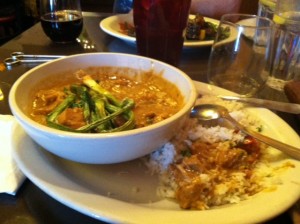 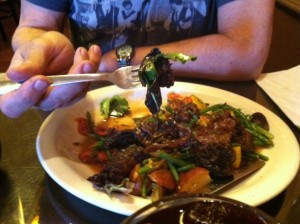 They also have some great African wines.  I really enjoy Goats do Roam.  Yes, that’s right.  I appreciate the humor but I frankly didn’t expect it to be a really nice wine.  It is, both their red and their white.  The goats DO roam at Fairview Estate in South Africa and when Charles Back isn’t making wine he’s making some of South Africa’s finest cheeses   Fairview was recognized by The Carbon Protocol of South Africa as the first Carbon Neutral Cheesery on the African continent.  I’m checking now to see if their cheeses are available in the US.  If you’re in Santa Fe, be sure and check out Jambo Café, jambocafe.net, 505-473-1269