“A History of the World in Six Glasses”

/Books about Food and Drink/ 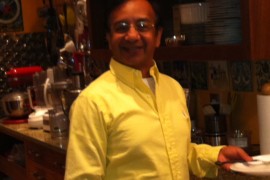 Books about Food and Drink, Gatherings

February’s Dinner and a Book had us reading “A History of the World in Six Glasses” by Tom Standage. An interesting take on six beverages and their place in the development of civilization.  Can you guess what the six beverages are?  They seem pretty obvious once you think about it.  Beer developed when we settled into communities a long time ago and domesticated wild grains. Wine followed and then distillation as people began travelling the seas.  Trading with different parts of the world brought the next drinks to travel the globe, tea and coffee.

Did you know Londoners were wild for coffee before they ever had a cup of tea?  That coffee houses were an exclusive male domain which then led to the ladies developing afternoon teas?  That teas from India were cultivated by the British so they wouldn’t be dependent on China for their teas and that it was somehow wrapped up with the opium trade?

Well, you gotta read the book.

The most surprising “historical” drink, the sixth on the list, is Coca Cola.

Coca Cola?  Yep.  Coke traveled the globe with our military beginning in World War II.  It was hoarded and saved for special occasions, sold on the black market.  It became an icon of everything America stood for and therefore demonized by our enemies and praised and enjoyed by our allies.

You gotta read the book.

But since the book was all about drink, what to bring for dinner?

Ellen cried foul when some people wanted to just bring beer or spirits to the dinner.  So, we all put our thinking caps on and came up with a hodge podge of delicious dishes.  There was a chicken curry, green beans with mushrooms, a wonderful potato dish, vegetable moussaka and chicken and waffles, a berry clafoutis and late to the party, stuffed acorn squash. There WAS beer and wine as well. We are always so grateful at the bounty and love we bring to these dinners.  We are so blessed with great food and great company.

The chicken and waffles were quite a production and yes, it was mine.  We’d had a discussion at the board meeting that somehow led us to chicken and waffles.  People love the combination of sweet and savory.  It’s considered a southern thing, certain combinations of sweet and savory.  Indeed, I had made blueberry corn muffins with buttermilk and raw sugar that morning.  I wouldn’t have even considered making them with sweet milk unless I soured it first.

Anyway, there’s varying stories of the origins of chicken and waffles, some dating to Thomas Jefferson bringing back a waffle iron from France.  But more than likely, the dish probably had a much later beginning.  It’s thought of as a soul food dish and it certainly seemed to travel to the north with former slaves after the Civil War.  It’s very popular from the Deep South to Baltimore.

So assuming its southern origins, it was thought that I should make chicken and waffles.  I’d never had the dish but my fellow foodies were waxing nostalgic about them, so I was ready to give them a try.  I fried the chicken at home – the batter had hot sauce in it adding to the contrast with the sweet waffles.  Ellen and I sat up our waffle irons and started the assembly line of waffles going right at dinner time.  Everyone dug in.

We were all so excited to try the various dishes that I didn’t get pictures until people took their seats!

Next month:   “Consider the Fork:  A History of How We Cook and Eat.” 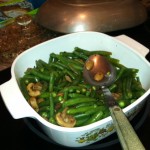 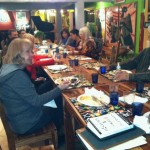 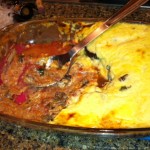 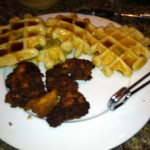 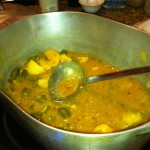