Just got back from SlowFoodUSA National Leadership Conference.  It was held in one of my favorite cities in the US, New Orleans, Louisiana.  Or N’ahlins as the natives tend to say.  The first night, we were feted with an incredible opening reception at Dickie Brennan’s Bourbon House, the restaurant that anchors the Crowne Plaza French Quarter Hotel where we stayed.

I don’t think I’ve ever eaten so many oysters at one time. The buffet resembled a beautiful, bountiful, fancy seafood market.  Crawfish, shrimp, crab legs and oysters, oh my. Feeling decadent and celebratory I start with a glass of champagne before moving to the buffet.  Focusing as I was on the oysters, I almost missed the OTHER table where a chef was serving up catfish cakes with a sprinkle of, yep, catfish caviar.  I was instructed by the chef to go get me a few more oysters and come back to experience a Dickie Brennan specialty.  I did as told and once back she told me to sprinkle on some of the caviar and prepare for a treat.  She handed me a little fork and I plopped yet another oyster in my mouth and savored the addition of a very mild caviar.  But wait!  She pointed to a rack of vodka shot glasses and encouraged me to pour one back which, of course, I did.  Wow!  What a welcome to a decadent, alive, raw, joyous city. 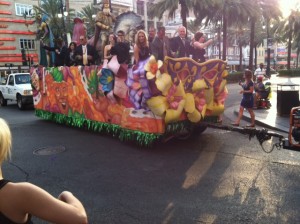 A parade on Bourbon Street. A wedding? a graduation?

On my day off, I drove around the Ninth Ward to see the wonderful things that Brad Pitt, Harry Connick, Jr. and others are doing for an area so decimated by Hurricane Katrina.  I spent a sweaty night packed into Preservation Hall to hear some great jazz.  And one night, yet more oysters, both raw AND grilled, at the Acme Oyster Bar around the corner from our hotel.  I didn’t begin to explore the city, staying so close to the smelly, dirty, magical, merry heart of N’ahlins, the French Quarter. 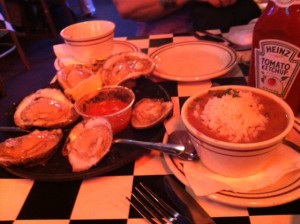 Raw oysters at Acme Oyster Bar. Waiting for the grilled ones to arrive 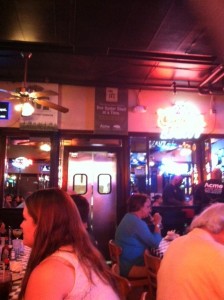 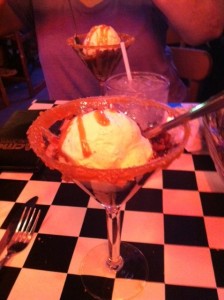 I ate at the Bourbon House twice more.  Couldn’t help it.  Became enamored of their Bourbon Milk Punch made with gelato.  It’s like having eggnog all year long.  It’s even featured on their breakfast menu.  How decadent is THAT? 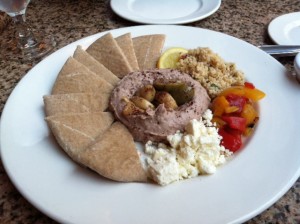 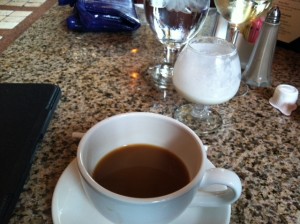 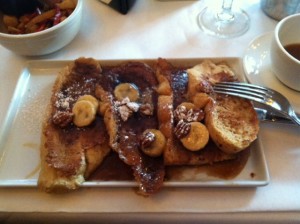