Perfection is so illusive….. 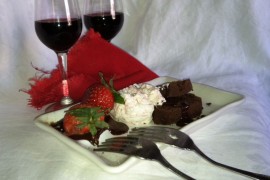 I’ve been trying to perfect a cake recipe for a week now.  The chocolate beet cake with beets and  beet juice was a bomb.  (The beet juice was too much.)  It had to be dumped in the trash.  The second try, no beets, no juice, a more standard recipe should have worked but didn’t.  It, too, went in the trash.  The third one is delicious but still not exactly what I had in mind. 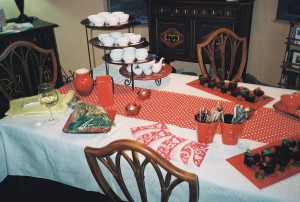 Setting up for the party. See my notepad and wine on the left? Two essential ingredients for party planning….

I’m feeling a little shaky right now – three tries and it’s still not ‘right?’  Have I lost it? Well, maybe not but I am out of practice.  I’ve been eating out a lot and enjoying the art and labors of others.

Alas, cooking is like any fine skill, it requires practice.  So, a little uncertain of my skills and of my palate, I remind myself that failure teaches us.  With every failure we come closer to a great success.  I know I’m sounding like a self-help book but it’s true.

I comfort myself with the image of Anthony Bourdain going back to the kitchen at Les Halles after his long stint on the Travel Channel (this was filmed for his series, No Reservations) and finding himself exhausted and in the weeds as dinner hour struck.  It’s hard work and he was out of practice.

Or, I remind myself of an article I read once, the article itself about grand failures in the kitchen.  I remember one hostess in the article who had decided to serve to her dinner party of 10 a medieval recipe she had found.  Something about a leg of lamb boiled in a pillow case.  It was a fiasco (how could it not be?).  I cheered that hostess and her daring and I felt liberated.  The article reminded me that failure need not defeat us, in fact, shouldn’t.  Our intrepid hostess, confident of her skills and her audience, knew there would be other dinner parties.

So away doubts and fears!  There will be other chocolate cakes!  Although this one’s pretty good.  Here was the idea:  a peppermint chocolate cake with chocolate wine in the ingredients.  So, what I learned:  choose a dense chocolate cake recipe.  It has to hold up when the little pieces of peppermint melt in the cake.  I used a chocolate sour cream recipe from Gourmet 1995 I found on Epicurious.com  Replace the third cup of water in the recipe with the same amount of chocolate wine.  I used Black Mesa Winery’s Black Beauty.  You can also punch holes in the cake after it’s done and drizzle the wine over it.  After mixing the batter, add about a half cup of crushed peppermint candies.  Don’t crush them to powder but leave them in small pieces.  Glaze with a dark chocolate semi-sweet glaze.  Serve with peppermint ice cream or peppermint whipped cream. Both can be made by stirring crushed peppermint pieces into the ice cream or whipped cream. Soften the ice cream first and then refreeze. 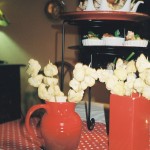 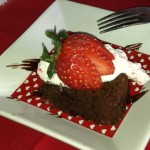 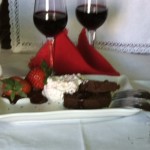 As we were setting up the photo we had an unexpected guest.