The Devil’s in the Details 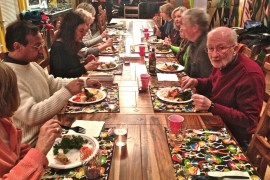 Cookbooks, Gatherings, How To, Recipes

It’s our first Dinner and a Book in 2014 here in Santa Fe.  This month we read “In the Devil’s Garden:  A Sinful History of Forbidden Food.”  I loved the book but others found it disturbing or downright unreadable.  Some suggested the author, Stewart Lee Allen, needed a great deal of therapy.  He was taking the heat for recounting the unusual eating habits of other cultures and times.

We could have gotten into a whole discussion about our own prejudices about food:  why not organ meats?  Why not dog or cat or horse? Instead we had a lot of fun recounting some of the outrageous (to us) taboos and practices of yore (and not so yore, since we recounted Mitterrand’s last meal including not one but two delicate, outlawed songbirds).

None of us were really inspired to cook anything from the book.  The Roman version of the now popular turducken, a “cow stuffed with lamb stuffed with pig stuffed with rooster stuffed with chicken stuffed with thrush” was out of the question, as were, of course, the outlawed songbirds.

So we went back to things that we love and cherish.  There were Julia Child’s scalloped potatoes, Stilton and Triple Cream Cheeses with a tomato basil bruschetta, salmon with a wonderful herb crust, a potato casserole with onions and cream cheese, Deborah Madison’s carrots with coconut butter and lime, flourless brownies made with almond butter and a lemon farina pudding.

I made brioche.  I was somewhat inspired by the author’s recounting of the beginning of the French Revolution – begun by the peasants not because they were starving, but because they were denied the soft, buttery French bread of the nobles.  That seems like a very French reason to begin a revolution. And what’s more French than a brioche mostly made with eggs and butter held together with some flour and takes 24 hours to make?

Here’s Ardis’ wonderful recipe for Chicken with New Orleans Red Sauce.  Another great dish on our not-at-all-inspired-by-the-book menu.  Next month: “A History of the World in Six Glasses.”

Chicken with New Orleans Red Sauce
2014-01-29 17:48:46
This is a classic Creole sauce and is not at all like Cajun sauces, which are much spicier. The Creoles considered their cuisine more subtle and sophisticated than the Cajuns'!
Write a review
Save Recipe
Print
Ingredients
Instructions
Lara's Favorite Things http://www.larasfavoritethings.com/ 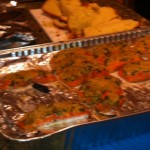 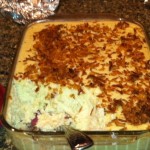 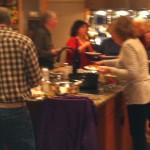 Carrots with coconut butter and lime 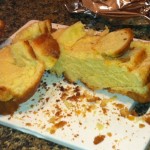 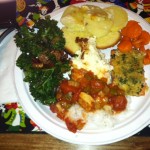 A plate of wonderful food