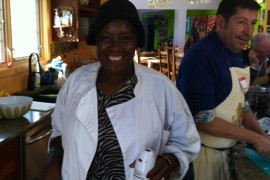 Always a hectic time, the last two months of the year. And then, boom! It’s all over and we’re in January thinking where did it all go? Did everyone write New Year’s resolutions? I’ve got a few. Several of which involve cooking and writing.
But first to catch up on the events of the last two months. November saw Slow Food Santa Fe hosting their annual fundraising event to help send some of our local ranchers/farmers to Terra Madre next year. We were lucky enough to have the wonderful support and help of Louis Moskow and his terrific restaurant 315 in Santa Fe. Chef Moskow put together a 4 course dinner, locally sourced with beautiful ingredients. Almost 100 supporters of Slow Food Santa Fe gathered for a terrific meal and good times.
The 4 courses were brilliant. Just enough to enjoy the wonderful flavors without overwhelming us before we got to dessert. The wine complement for each course was thoughtful and well planned from his extensive wine cellar.
The silent auction offered a variety of items from a beautiful basket of spices from Los Chilleros to a hand felted bag from local wool, stained glass and pottery from local artists and hand knitted caps from wools and wool silks. I’m sure those caps are coming in handy right now since it’s very cold here in New Mexico as it is in so many places across the country.
We were all having such a good time that we failed to take any pictures except for this one of two of our members, playfully modeling one of the beautiful wool caps. Thanks everyone for a beautiful fun-filled night. 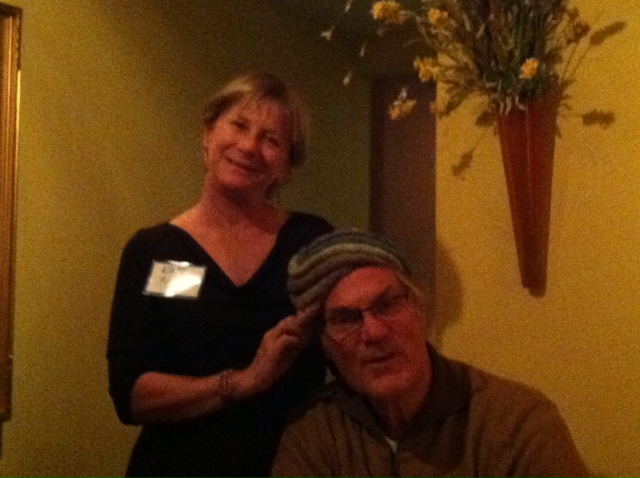 Modeling a beautiful hat from the silent auction

Luckily, I remembered to take pictures of the African cooking class in December. Ceci Tadfor is a well-known chef in Santa Fe and was gracious enough to come to Ellen’s well-appointed kitchen and teach us about Cameroonian cooking.
Ten of us gathered at Ellen’s to watch Ceci cook chicken with peanut sauce, black-eyed pea soup with coconut milk and njama njama (greens). We also, some of us brave souls, tried to learn how to make puff puffs, the Cameroonian version of beignets or sopapillas. (It would be interesting to trace the voyage of fried sweet breads. Did Africans bring the idea to Louisiana?) We all got a kick out of watching the few trying to squeeze and drop the dough into the oil. Ceci made it look so easy and her puff puffs came out round and golden brown. Not so much the others.
Take a look at the pictures below. 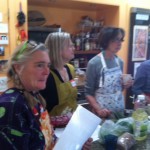 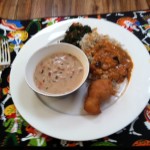 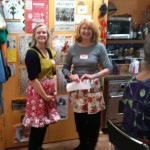 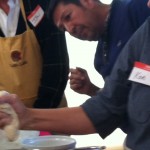 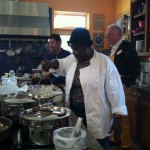 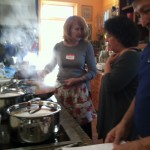 
Also, there of course were the monthly Dinner and a Book gatherings. In November we read “Taco USA: How Mexican Food Conquered America” by Gustavo Arellano. The title tells it all don’t you think? Did you know salsa overtook ketchup in the 90s as America’s favorite condiment? At the dinner, there were some wonderful Mexican dishes. Two of my favorites were pumpkin enchiladas and Mexican bread pudding.
In December, we read “The Telling Room: A Tale of Love, Betrayal, Revenge, and the World’s Greatest Piece of Cheese.” Michael Paterniti can tell the most offbeat stories and make them page turners. I just got another of his books: “Driving Mr. Albert: A Trip Across America with Einstein’s Brain.” Totally different topic, totally fascinating.
Most of my eating adventures the last few months have been Slow Food events. Due to a series of misadventures I missed Thanksgiving dinner in Los Angeles and Christmas in Santa Fe but I have several trips planned for the next few weeks including to my own kitchen in Ojo Caliente. And there may be a Mardi Gras themed dinner in the future for 6 to 8 Slow Food members prepared by yours truly. More about that later. In the meantime, Happy New Year and a great 2014 filled with great food, wine and friends.