A Taste of New Mexico? Not Quite. 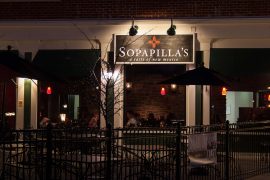 Back in Nashville last weekend. There are so many restaurants to try and plays to see along with friends and family. Some friends of ours suggested a new restaurant purporting to be a New Mexican restaurant, and thought we’d be interested having lived in the state for 16 years. Sopapillas.
Alas, it was not something I can recommend. Well, not for the food anyway. The service was spectacular and our server, Anna, kept us entertained and even had the manager over to take our entrees off the bill when we um, complained about the food. (Full disclosure: we insisted that she not take the food off the bill, that we were enjoying ourselves immensely.)
Anyway, we started with a 3 dip sampler: guacamole, queso and queso with beans (I think). Despite their claim that they make it fresh per order, it was pretty standard. If you’ve ever had guacamole at Gabriel’s in Pojoaque, NM outside of Santa Fe, you’re spoiled for life. The queso dips were ordinary as well. I had hoped for a new take on the taco stand standards. The salsa was spicy and chunky and delicious.
I ordered the lobster and crab enchiladas. The menu said that they came with a queso kale sauce, a choice of refried, black or pinto beans and rice. What it came with was a slightly sweet sour cream sauce. When I asked about the substitution I was told that they hadn’t changed it on the menu yet to this sauce, the Baja sauce. The sauce added nothing to the dish and I have been to Baja and never had anything close to this sweet bland mixture. They brought me a bowl of the queso kale sauce. Randy exclaimed, “Oh, look! They brought your soup.” Alas, it was a standard queso with ribbons of kale, nothing special either.
I’m all for chefs making a cuisine their own but this seemed like someone who had no grasp of New Mexican food and just threw in the latest vegetable to appear hip. There was little spice, no complexity and the lobster and crab indistinguishable lumps of seafood. The tortillas were white flour tortillas in a dish that could have been so well served by blue corn tortillas. I didn’t taste Randy’s carnitas but I was just truly disappointed in my food. The company, however was wonderful, Dos Equis on draft a plus and the service entertaining and delightful. I’ll give them another try, maybe for their brunch, which Anna says is really good.