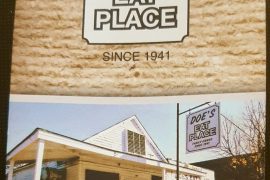 When I moved back to the south I decided I would take lots of road trips and explore this part of the country. So it was that we drove to Paducah over July 4th weekend and discovered Doe’s Eat Place, a franchise. I also discovered that the original Doe’s was in Greenville, MS. So off we went to the original Doe’s a couple of weekends ago. 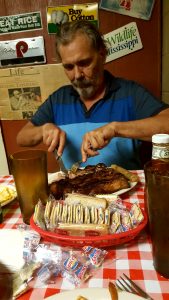 Randy and his meat for the week.

Y’all, I don’t like that part of Mississippi. Or Arkansas. I’ve now been to Helena, AR and Clarksdale, MS. To a struggling music festival and a juke joint festival. Clarksdale is the birth place of Morgan Freeman. I adore Mr. Freeman and I am so glad that he ESCAPED Clarksdale to share his talents and wisdom with the world. I’m not even sure the fine dining restaurant he opened there years ago could entice me to ever go back there. Alas, I don’t have to agonize over it since it closed.

OK. So I zigzagged my way across 3 states and over the Mississippi River twice to this time go to Greenville, MS. I passed the sign for the music festival in Helena, now warn and ragged and the turn off for Clarksdale and Tunica. All of this to get to yet another desolate, dying town in the delta. I swear the poverty and racism shimmered off the hot roads in the humid air. Things are so…..UNMOVING. THE SAME. ALWAYS THE SAME.

But I’m on a mission. To eat at the original Doe’s. A James Beard award winning restaurant and voted by someone as one of the 10 Best Places to Eat in Mississippi. We’d driven down on Sunday knowing Doe’s wasn’t open till Monday, giving us an afternoon to unpack and virtually do nothing else. On Monday, I wanted to explore the E.E. Bass Cultural Center with the beautiful carousel.

OK, so the synagogue with a museum celebrating 100 years of Jewish history here in these parts.

Hours before Doe’s opens for dinner we find ourselves at Shotgun House BBQ. They had just…..

But they agreed to fix us BBQ sandwiches. AND they were delicious. It was the best BBQ sauce I’d ever tasted. We sat and talked to the owner, a woman who worked at Walmart for 27 years in a small town in Louisiana before 4 years ago moving to Greenville and buying Shotgun. I asked her about the E. E. Bass Center. She had no idea who Mr. or Ms. Bass was. 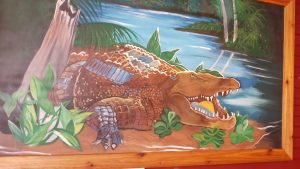 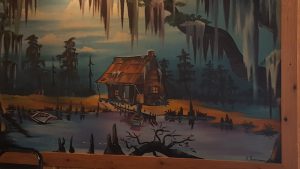 Mural at Shotgun’s. Rescued from a barn wall.

When the cook came from the kitchen I complemented her on the wonderful sauce. She said little, looking uncomfortable that I would give her eye contact and actually acknowledge her.

We drove around some more finding nothing and a little after 5 parked at Doe’s.

Doe is Dominick Signa who after selling his bootlegging still for $300.00 and a Model T and his wife, Mamie, found a tamale recipe opened Doe’s Eat Place in 1941. They served blacks out the front and the white lawyers and doctors out the back “like segregation in reverse” it says in their brochure. The family still owns and runs this original Doe’s. According to the brochure, Aunt Florence, who was married to Doe’s brother, Jughead, may have tossed my salad. We entered through the front kitchen, the original honky-tonk. We were greeted warmly and led to a table in the back room. Our waitress greets us and says, “Do you know what you want to drink?”

“We’ve got beers. If you want wine or liquor, you bring your own.”

I did not know that. The beers were American standards but we were able to order Heineken. I guess it’s been around long enough to qualify as American. When she brings them back, she asks, “Do you know what you want to eat?”

Still clueless, I have to ask what they have.

“Fried shrimp, a 10 ounce filet, a 2 pound ribeye, a 2 ½ pound porterhouse, tamales, spaghetti and meat sauce. They all come with fries. Salad’s extra.”

I’m feeling a lot of pressure to get this deal done. Everyone around me knows the rules and I’m holding up the flow. I order the fried shrimp with a salad. Randy, against my better judgement, orders the porterhouse. “Do you know how much meat that is?”

I watch a family of 5 at a table near us divide up that same porterhouse between them and it’s still A LOT.
When our waitress swoops back around I ask her for an ala carte order of tamales. Tamales are big down here and this little slice of food history is why I’m here.

The tamales don’t look like the ones in Mexico or New Mexico. They’re wrapped in paper, not corn husks. Who did Mamie get her recipe from? Why are tamales such a thing down here? These are cigar shaped, handmade and beautifully spiced. The fried shrimp had a delicate light breading and the shrimp was perfect. They were huge. I was able to eat three of the 20 on my plate. People around me knew I was an outsider but when I cut into my shrimp with a knife and fork, I’m convinced they thought I was a Yankee despite my southern accent. The fries were hand cut, right out of the fryer, delicious. 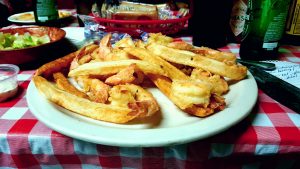 Lots and lots of fried shrimp.

I began to feel like I was at one of those Sunday dinners so many years ago at Grandmother’s. Where you come back from the city, you keep your mouth shut about all the wondrous things you’ve learned and you eat what’s put in front of you. The food’s good just not what you appreciate or enjoy anymore.
Randy’s steak was huge and really good. I know that Anthony Bourdain was down here and he probably could eat the whole thing AND some of my shrimp too but we boxed up a lot and Zorr and Randy feasted on porterhouse for days. I had shrimp in salad and on pasta and even shared with Noche.

I marvel at the amount of food people can put away! I envision 3 of those shrimp on a bed of thinly shredded cabbage in a rice vinegar dressing, a dollop of cocktail sauce on top…

But I digress. The James Beard Award in 2007 was for “American Classics.” Doe’s has been written up and visited by magazines and food critics across the world and won so many awards they have to rotate them on the walls. I’m happy for them but I left there knowing my quest is over. As I leave through the “front kitchen” and watch them pop a plate of spaghetti and meat sauce in the microwave, I know I’ll never be back.