About a Salad (and Other Things in Nashville) 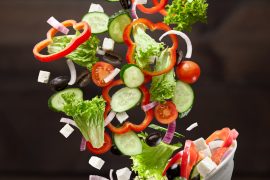 I’m excited about a salad I had last time I was in Nashville. Here’s the thing: I, foodie that I am, have become a snob. I avoided chain restaurants for years. With good reason! New restaurants were popping up everywhere, fresh, creative food became a thing. Chefs became celebrities. I awakened into a world where fresh vibrant food was available on every corner. People started demanding something different from the fried, standardized food that had been available until then. And the chain restaurants took notice. And now, I’m noticing that.
Ruby Tuesday’s has been around for a long time. I don’t remember what their entrees were all those years ago because we, “girls,” would flood there at lunch time from our office jobs for their “healthy” salad bar. We were always dieting back then which meant filling our plates to the brim and then slathering all those alien fresh things with a lot of dressing. We always were frustrated with our lack of weight loss but felt really righteous with our food choices.
Ruby Tuesday’s still has the salad bar and I’m sure it’s tasty. They advertise 55 fresh ingredients. But I sit down and order their new kale Caesar salad. Made with kale and romaine lettuce with parmesan crisps. Kale the vegetable of the moment but really a nice addition. The crowning touch, the thing that brought this salad home for me was the addition of roasted cherry tomatoes. I’m still thinking about those roasted tomatoes. Such a bright flavor burst. Perfect.
They had the same salad on the menu at City Fire in Nashville the next night. I didn’t order it, I wonder if it had roasted tomatoes. I ordered tuna tartare and then scallops. Oh, lord, it was all so good. The tartare, molded with avocado and mango salsa, served with fried wanton chips was light and tasty. Perfect for a summer’s eve. The scallops, so simple, so delicious with butter sauce and capers, served with a warm corn and bacon succotash. Perfection.
I walked out on 12th Avenue after dinner. We were going to the Station Inn to see the Doyle and Debbie Show. 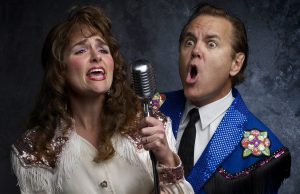 I turned a full circle. Wow! THIS is 12th Avenue?!? In Nashville? High end restaurants on every corner and every corner I can see past that. Lights of a cosmopolitan city. We walk half a block to the Station Inn. A little squat block building in the midst of all this glamour. 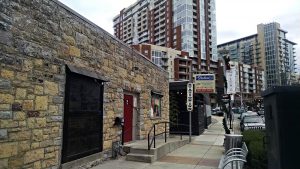 Still hosting great music, tonight we’ll see a parody of country music. Perhaps you remember some of Doyle and Debbie’s hit songs? “Whine, Whine, Twang, Twang” or my favorite and Debbie’s opus: “When You’re Screwing Other Women, Think of Me.” Oh, they bring back memories, don’t they?
A great night in a great city. As with any good city, the old and the new mesh and play side by side.