Drinking It Up for a Good Cause! 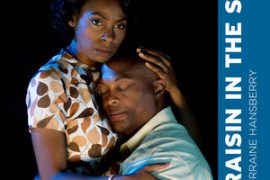 May 7th we were in Nashville for the Broadway Brunch, a benefit for Nashville Rep Theatre. We were lucky enough to see their production of “A Raisin’ in the Sun” a couple of weeks before and wanted to support their efforts.
Eddie George was the honorary chair of the event and one of the stars of “Raisin.’” I know he is an award winning athlete and that he played football for the Tennessee Titans. While I don’t follow football, from what I understand he was a pretty good player. If he played football anywhere near as good as he performs on stage, he must have been awesome indeed. Now he’s embraced Nashville and theatre in a big way and how lucky Nashville is to have him. 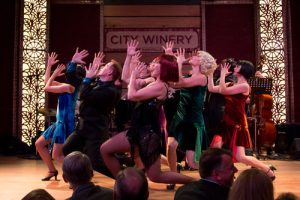 I hadn’t been to the City Winery before but the event was well organized and the mimosas and bloody Marys flowed freely. I have to say the food wasn’t anything to brag about. They passed hors d’oeuvres in the lobby. I found the cantaloupe wrapped in prosciutto to be a big disappointment – the cantaloupe was not ripe and both it and the prosciutto had little flavor. The goat cheese tart fared some better.
They piled the bacon on the plate at the sit down brunch, perhaps to make up for the cold tasteless potatoes and forgettable quiche. I don’t remember dessert at all.
It is true that we weren’t there for the food and I did indeed have a wonderful time – I really wanted that Burmese dinner for six that was auctioned off but Randy grabbed my paddle when the bidding went into the thousands. I’ll just have to research Burmese food and have my own damn dinner for six.