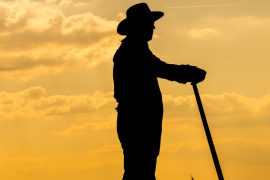 When we lived in Oxnard, CA we were aware that the state was suffering drought. Yet, Oxnard agriculture continued full tilt all year long. About every six weeks the fields were cleared of the debris of the recent harvest and planting started all over again. Those crops, ladies and gentlemen were all picked by hand. I would watch the workers gather early in the morning, big sun hats covering their faces, they’d spread out across the fields. They’d take a break in the middle of the day when it was just too hot and then resume in late afternoon.
Immigrants all. Migrant farm workers. Gathering OUR FOOD. It gives true meaning to the term back breaking labor. 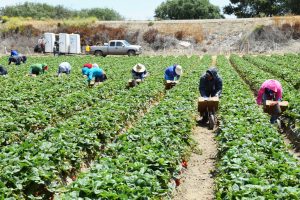 I met a man at the Jiffy Lube in Oxnard. He was getting work done on his farm truck. He was first generation American, his family from Mexico. He owned an d farmed acres of organic farm land. He told me that he’d built up his holdings over time while he worked for another farmer. The man he worked for encouraged him to start his own enterprise. For years he worked for one farmer while buying up his own land and working it too. Now, all on his own, he sells to stores and farmers’ markets.
Twenty-seven years on the land.
It was obvious he was still deeply in love with it all.
Aware of the six week growth cycle, I asked him how often he planted.
“Oh, I plant something every Saturday,” he said. “And I do it by hand. Not a machine. More love. It makes a difference.”
I was trying to imagine the hours bent over in the fields. The heat, the blazing sun. How is this man still standing? I wondered. He told me his story with such joy and pride.
“My daughter is becoming a lawyer. She’ll help with the business. My son is becoming a chef. My son says, ‘You grow it, pop. I’ll cook it.’”
I shook his hand as I left, thanking him for his service.
Is there such a thing as a Farmers Appreciation Day?
There sure should be.